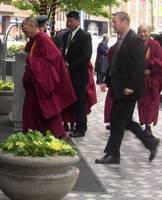 Agam's Gecko is dedicated to His Holiness the XIV Dalai Lama, for his tireless work for freedom, human rights, universal responsibility and compassion.

This is the first test post of the blog, just to see how the system works. I wanted this image to be the first thing to appear here. The picture was taken by Agam following the special convocation by Simon Fraser University to confer honourary degrees upon His Holiness, Bishop Desmond Tutu, and Iranian human rights activist Shirin Ebadi, which took place at Christ Church Cathedral on 20 / 04 / 2004. A short time later they were all hard at work again, inspiring an audience at University of British Columbia with a roundtable discussion on education of heart and mind. In the early hours of the following morning, His Holiness flew eastward to Ottawa for the political aspect of his journey and his meeting with the Prime Minister, while Agam flew westward and returned to his home in Bangkok.
- posted by Agam @ 9:15 AM