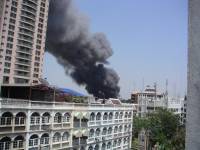 Yesterday afternoon I was at my desk, getting caught up with accumulated work of the past month. Sirens sounding outside my window - nothing unusual but I usually look to the street to see the type of vehicle. Usually they are the mini-firetrucks, like a slightly souped up small pickup truck with a handful of men riding in the back. After the second one blew past, I looked out and thought "Hmm, looks like rain today too," noticing the darkening sky toward the southeast. After the third firetruck I realised that those were not rainclouds, grabbed the camera and ran up to the roof.

Firetrucks and ambulances ran up and down our street for the rest of the day, and the slum fire was brought under control by late evening. Hundreds of people lost their homes, I have no information yet on casualties. This morning I heard it was said to be the worst fire here in 17 years. Click on the thumbnail image for a larger resolution view, and click here, and here, and here for my other shots. The view of the condo tower especially brought back memories of a certain other iconic image of recent times.

While it was impossible to see the full scope of the disaster from the window of my tastefully appointed editing suites on the second floor, it was a heart stopper to take in the scene from the roof. I felt a shared experience with those who have had their cities shaken by terrorist bombings in recent months and years. I had been getting caught up with my Thailand news that morning, and the latest threats against this country and South Korea for helping in Iraq's reconstruction. Embassies here have been on heightened alert since written warnings were received on Tuesday or Wednesday. The area of this blaze is directly behind the Australian Embassy, and my location is approximately midway between the two. I knew there was no possible target of terrorists there once I saw the actual location of the blaze, however early reports on BBC played up the possibility.

So I wasn't actually planning to get the blog up so fast, but yesterday's event is just exactly what the medium is for - immediate on the ground reporting - among other things. So it's been a rush job to set it up in basic form, but expect lots of changes in the near future. And for those friends who may have seen the video of the fire on your newscasts, and recognised some of the landmarks around our place here, don't worry everyone is just fine here at Agam's place, including Gecko.

UPDATE: (Sunday, 1:15 am) : Those made homeless by the fire in Thung Mahamek community are thought now to number between 4,000 - 6,000. Around 700 homes were destroyed in the area, directly behind both the local police station and the Immigration detention centre. The families of about 50 police officers were also displaced from their living quarters, but there are no deaths or injuries reported. Temporary shelters are being provided at several nearby schools and sports fields. 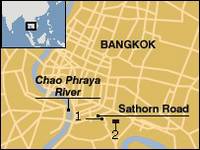 This BBC story carries a map of our area.