hatever else you might do today, watch this please. The fine people at The Nation newspaper in Bangkok have produced a powerful music video:

BURMA WATCH
Watch freedom lovers around the world joining hands to call for Burma's military junta to return peace and freedom to the Burmese people.

When the protests in Burma began in August, they were led by students and democracy activists. After they were rounded up by the regime and either arrested or in hiding, the monks came forward to lead with moral responsibility. After the monks were brutalized, arrested, killed or locked in their monasteries, the public kept up the struggle. Now they too have been slain, likely by the hundreds. Sustained pressure can now only originate from the world's people.

The same kind of worldwide pressure upon governments around the world, kicked the United Nations off the fence to deal with the Timor crisis in 1999, and in record time. Citizens of countries all around the world provided leadership to their governments, and they were the essential motivators.

In some circles, it seems, the word "freedom" has become a dirty right-wing word. Try to hold that thought while watching Freedom for Burma. Deep Wai to The Nation editors for this powerful piece. 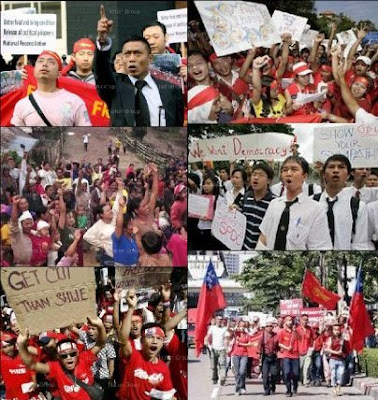 
The song is a kind of anthem from the 1988 freedom struggle. If anyone has the details -- origin of the song, its name etc. please email me.

Souls of the living and the dead of burma will never forgive and forget the oppressors
until the end of time...
Landscape of burmese history carved by fresh blood,
Revolution and...
The martyrs who fell in their fight to free their country...
The country of the proud martyrs
Oh father Aung San! (Suu Kyi's father-national hero)
Our country has been tainted by innocent blood...
Corpses by the hundreds litter the streets
once the shooting stops

Mark Steyn wrote the other day:

If Rumsfeld is a "fascist." then anyone can fight fascism. It's no longer about the secret police kicking your door down and clubbing you to a pulp. Well, OK, it is if you're a Buddhist monk in Burma. But they're a long way away, and it's all a bit complicated and foreign, and let's not "confuse the very dire human rights situation" in Hoogivsastan with an opportunity to celebrate our courage in defending "academic freedom" in America...

The pen is not mightier than the sword if your enemy is confident you will never use anything other than your pen. Sometimes it's not about "freedom of speech," but about freedom. Ask an Iranian homosexual. If you can find one.

Wai to Blue Crab Boulevard and thanks to Gaius for inviting his readers over here, and Michelle too..