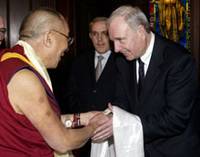 CBC News has a story on the Dalai Lama's meeting with Paul Martin on Friday. For all the fussing over whether the meeting would go ahead, whether political issues would be discussed, and foreign ministry bureaucrats taking such great pains to deny the slightest hint of any such intention, Martin was quite frank ahead of His Holiness' arrival in Ottawa. He said he expected they would talk about Tibet's political situation, the very thing which puts Beijing into such a fit of conniptions (and actually caused them to do much of the Tibetan leader's public relations work for him). I really enjoy it when the PRC leaders (or their minions in embassies and consulates around the world) display their childish insecurities for all to see. When their Ottawa embassy whined that the Tibetan freedom movement is just like Quebec separatism, they were roundly rebutted with details of the fundamental differences in the two situations in virtually every daily newspaper's letters page - including from representatives of the Quebec separatist party. That was some good advance publicity before the great man even arrived in Vancouver for his first stop.

But the example I liked the best was reported in Swedish daily Dagens Nyheter on April 17 the very day he landed in Vancouver. Chinese Foreign Minister Li Zhaoxing was having a trade shindig in Gothenburg when he was asked by Swedish reporters about executions and the human rights record of his country. Mr. Li became very upset at this as usual - I've seen him interviewed in English some years ago as Ambassador to Washington, and it carried the most disgusting insults to the Tibetans and their leader I'd ever heard, delivered in the most slimy fashion by him. I see he still has the knack. Telling [Swedish news agency] TT that he had great difficulties to understand the Western craze for the Nobel laureate the Dalai Lama... [Translation from Swedish by Monica Masuda]


Li: Many European politicians, and politicians here, seem to like the Dalai
Lama very much. But that man is nothing but a violator of human rights.
This attitude of some of your politicians shows that they are no true
advocates of humans rights.

TT: So your stand is that the Dalai Lama is opposed to human rights?

Li: That's correct, you are welcome to visit Tibet and see by yourself.

Well that's quite enough of that nonsense, but it sounds like Mr. Li has been giving history lessons to Harry Sterling, a former Canadian diplomat who wrote a surprisingly biased and uninformed opinion piece in the Toronto Star. I believe I have met some of Sterling's fellow communist apologists who seem to inhabit some of the darker corners of our civil service bureaucracy. When I get more time I'll spend a few minutes disecting his piece, that should be a good exercise for my first fisking job here. But for now I feel like just enjoying the Canadian warmth being shown to His Holiness and the Tibetan freedom movement during the first week of the visit. British Columbians were found in a recent survey, to have named the Dalai Lama as their choice of most trusted spiritual leader on the planet - with 50% more trust than the second place Pope John Paul. Of course it's not right to view it as any sort of contest, but it does show how British Columbians feel about the great man. Foreign Minister Li and his Zhongnonhai cohorts just don't get it, and they don't yet recognise that they have the best chance of solving the Tibet issue in a peaceful and mutually agreeable solution with this Dalai Lama while he is still available to help them. Once he is not around, all bets are off.

Check out the CBC video of the Ottawa meeting
here , or if you prefer realvideo format, launch it from the news story linked from the photo above.

CBC Vancouver will air video recordings of some of the events during the next few days.

The online webcasts are still available here but have been taken off the official site now, so they may not be serving these files much longer.

The CBC backgrounder has been updated for the visit.

Hana Gartner's interview which I was fortunate to be able to watch on my last night in town.

I see my little gecko friend has introduced himself this morning. I've never actually seen him doing his keyboard-dancing, reptilian pundit routine - he just whips off postings while I'm making coffee or answering nature's call. What the heck - collaboration with a non human sentient being who happens to know how to type, I'm up for that. He's good luck for the house, so maybe he'll be good luck for the blog.
- posted by Agam @ 11:14 PM