he Sacred Flame of the Journey of Harmony (or something like that), the Britney Spears of fire arrived in the Kingdom of Thailand during the early hours of this morning. Her big day comes tomorrow afternoon, and anyone wishing to express their opinions should visit this web page for details in Thai and English. The Democracy Monument should be a fitting beacon for freedom lovers (the UN building is quite near).

Under the dark of night, it came. The torch  arrived in Bangkok well before dawn this morning, at a military airfield next to the old Bangkok International at Don Muang. I think I detect a little cynicism from the Bangkok Post writer:

It landed at 2.40am Thailand time, and the Chinese embassy scared up around 30 Thai-Chinese to wave Chinese and Olympics flags (no Thai flags) as the plane landed, according to the news agency AFP...

The torch will be kept at a downtown hotel on Friday, but guarded entirely by Chinese, who apparently do not trust Thai police enough to let them too close to the torch.

The luxury downtown hotel was not immediately named, but many Thais expected her torchiness to reside at the world famous Oriental during her stay. It was later announced that she had checked in at the Plaza Athenee, and was enjoying room service with her security detail, the People's Liberation Army Sacred Flame Protection Unit (PLASFPU). While in New Delhi, she had enjoyed the luxurious suites of Le Meridien (I thought they were boycotting French stuff), behind barricades of razor wire. The run in Delhi was witnessed by invited guests only, as it took a short route through the deserted avenues of the governmental district.

Related: A lady in the UK, Annie Yang, was shocked when she watched television pictures of the torch being surrounded by PLASFPU forces in London. Shocked, because she recognised them as the "Flying Dragons" -- the same secret police unit which kidnapped her in 2005 from her home in China for the "crime" of practising Falun Gong. Without trial or lawyer, she was sent to a labour camp for two years where she was "tortured, beaten and driven to the brink of suicide." Wai to Rudy at Chinese occupation of Tibet.

Thailand will deploy around 2,000 police and soldiers around the relay route (Delhi used 15,000), with full helicopter coverage to "scout out troublemakers." Protesters who attempt disruption will be arrested immediately and prosecuted for public disturbance, police say.

Foreigners will be expelled and banned from returning. Those with residency will have it revoked permanently, spokesman Lt-General Watcharaphol Prasarnratchakij says.

"Under the Constitution, an individual - local or foreigner - has the right to rally for a cause," he says. "Peaceful rally should be allowed".

Specific approved locations for protest have been prepared, but officials would not say where they are.

General Yuttasak Sasiprapha, president of the National Olympic Committee of Thailand, said that a "Plan B" was ready in case of trouble. The route would be changed or shortened if anything goes "wrong". One prominent Thai torch-bearer selected by China, M.R. Narisa Chakrabongse, founder and chairwoman of the Green World Foundation, already pulled out of the relay last month in protest against China's violent crackdown in Tibet.

The Bangkok Post, in an editorial today, says that China needs to heed the fuss surrounding the torch relay, and recognise that the status quo is unacceptable.

The Dalai Lama has shown great courage in his proposal for a discussion over the possibility of Tibet having some autonomy over its social and cultural life - a proposal many of his own people view as too mild. Instead of condemning the spiritual leader as the hand behind the chaos, China could have gained the trust of Tibetans and the international community had it shown a willingness to find a peaceful solution to the conflict.

Tibet is not the only, or even the major concern of many in Thailand. A much closer issue, and the one for which nearly everyone has very clear understanding, is the despicable regime of monk-killers in Burma. Many exiles and refugees from that neighbouring country are here, and made their presence felt during the Saffron Revolution and subsequent murderous crackdown in Burma last September and October -- almost as frequently at the Chinese Embassy in Bangkok or their consulate in Chiang Mai, as at the Burmese Embassy here. The warnings to foreigners are directed as much at them as at foreign NGO workers.

The Free Tibet Network and a coalition of Thai civil-society organisations are urging people to join a “No Torch in Tibet” march in Bangkok on April 19 in protest against the Chinese government’s refusal to stop the Olympic torch relay through Tibet in June, a land still awash in the blood spilled in China’s recent crackdown.

In response to this, the Free Tibet Network, the Thai Labour Campaign, the Social Critics Group - Chulalongkorn University, the Activists Society for Change, Young People for Democracy - Thailand and the Workers Democracy Group are organising the “No Torch in Tibet” protest march to coincide with the torch relay through the Thai capital on April 19.

Other Thai CSO's participating will be the Student Federation of Thailand, Committee for Human Rights, Working Group on Justice for Peace, Thai Coalition for the Protection of Human Rights Defenders, and the International Network of Engaged Buddhists.

One word to those officials who want to restrict my freedom of speech: Try to catch me, copper. 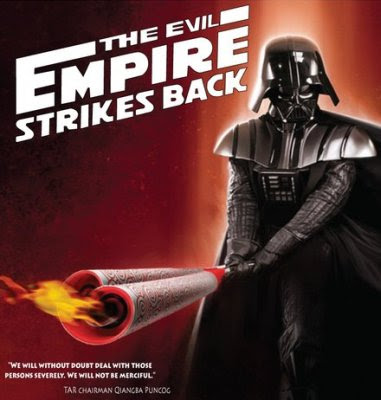